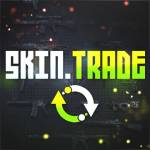 Trade up your old CS:GO skins for brand new specific skins with Skin amp. You don’t have to deposit your skins.  Just pick what you want to trade them with and go. Simple. Quick. Easy.
Skin Trade can easily be mistaken for a gambling website, but which it is not. It is an online CS:GO skin trading robot which enables players to exchange their unwanted items for ones they want. Players can trade their keys, skins, guns, and knives for other similar items within a few minutes. The website works as a facilitator for the exchange between players. A healthy community moderated by Skin.Trade makes finding, trading and using the bot easier.

The website’s target audience is young people between the ages of 15 and 40 years old. However, there is no imposed age limit so as long as you’re a CS:GO player or fan. According to Skin Trade, they have already facilitated over a million trades. Statics show that the bot is used by players in over 250 countries around the world. However, the vast majority of members are from the United States with 15.86% traffic from the country, followed by Germany and the United Kingdom with 11.23% and 6.36% respectively.

Skin Trade is currently offering a 2% Bonus for skintrade members. All that’s required to avail the bonus is for members to add Skin.Trade to their Steam nickname. That can easily be done by clicking on the link provided by the website and then changing their name. After which they can re-login to start availing the bonus.

When it comes to CSGO trading bots, Skin Trade is ranked amongst the best and most established. However, one of its major drawbacks is lack of a substantial bonus or loyalty system. Despite attracting a global audience, it lacks support for multiple languages beyond English, Russian and Turkish. That said its main attraction is an insanely simple trading mechanism that supports dragging and dropping. Plus, it’s near instant trading makes it the bot of choice amongst CS:GO players across the world.